Second Prison is what returning citizens enter when they walk out of the prison gates. They are metaphorically fenced in by over 48,000 laws and regulations that block them from jobs, housing, voting and some social services. Public perception and discrimination often prevent acceptance as neighbors in the community.

The term “second prison” was coined by Prison Fellowship. The Christian nonprofit also founded Second Chance Month to increase public awareness about the second prison during the month of April every year. Second Chance Month is observed by hundreds of partner organizations, congregations and businesses and has been recognized through a Presidential proclamation, U.S. Senate resolution, and by many other state and local jurisdictions.

Acts 519 Ministries has elected to continue using the Second Prison metaphor because it captures the essence of what a returning citizen faces. When someone is convicted of a felony and sentenced to a term in prison they know the date that they will be released. This time spent in prison is often referred to by the public as serving one's time or paying their debt to society. However there is a larger reality not generally understood.

It doesn't matter whether a person spends one year or 30 years in prison. Doesn't matter what their offense was. Just being convicted of a felony is a LIFE SENTENCE and it is nearly impossible to be paroled or pardoned. Their past permanently defines their future which is diametrically opposed to the Christian principle of being washed and made new.

Christians, once saved, look forward in life. We are called to release our past and follow Jesus. However, as a society we are so afraid of a past felon that we compound the problems contributing to crime by locking returning citizens in the Second Prison instead of helping people learn from their past, accept their redemption and live productive Christian lives.

Where would Christianity be today if the Apostle Paul were not allowed to walk freely, enter peoples homes in his travels and was denied access to the community and was reminded everywhere he went that he had been a murderer of Christians before his conversion? 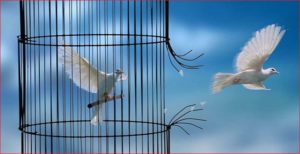 credibility about the transformative power of Jesus Christ. Returning Citizens today deserve the same chance today as Paul was given over 2000 years ago. That's why at Acts 519 Ministries we focus on freeing returning citizens from their Second Prison.

Not everyone who is released from prison is going to be successful no matter what we do, but I argue that, if given the chance, those returning would prefer to become responsible citizens.

Statistics tell us that the 48,000 laws, rules and regulations that stand in the way of a returning citizen results in 67% of released prisoners returning to prison within three years. If we could remove those obstacles, support our returning citizens instead of discriminating against them we should be able to reduce that recidivism rate significantly thereby reducing prison populations, reducing crime in our neighborhoods and increasing our workforce. That translates to less tax dollars spent on incarceration and more tax revenue - truly a win win win situation!

Some Facts to consider:

Today nearly one in four USA adults (this may climb to 1 in 3 in the next few years) have been either in jail or in prison. Over 95% of the 2.4 million prisoners incarcerated in this country will eventually be released. It is estimated that 67% of ex-offenders are rearrested within 3 years and that 50% of those return to prison. Many ex-offenders are returning to prison because of the difficulties of breaking free of the Second Prison. The USA incarceration rate is the highest in the world at 655/100,000 people, over three times greater than any other developed country!*

This is why we focus our ministry Beyond the Razor Wire!